I am a task oriented person.  I wake up in the morning with an internal "To Do" list printed on my brain.  Few things make me as happy as scratching tasks off of a real paper list.  In a crisis I am action oriented.  I am the person that says, "Slow down.  Give me the facts."  In my mind I am organizing them, and formulating a plan of attack, and making a list of what needs to be done.  I am scrambling for paper and a sharp pencil.
I am not a tender person.  I want you to tell me what you need me to do, not what you need me to be.  Even when it comes to tenderness, I want the list.  These are the things a tenderhearted person would do in this situation.  Oh, okay.  Got it.  I can do that.

Would you look at that?  It looks like a "To Do" list.
Oh yeah, do all those things with a side of love.  Wait no.  This isn't a "To Do" list, it's a "To Be" list, and the list goes like this:
My younger, action oriented self greets this list with disdain and disgust.  She argues loudly that love has actions.  Look, they're all there in the list.  Things to do, and we need to be doing them, and scratching them off our lists.  But my older wearier self wonders, because I have tried to muscle my way into love again and again, by making the lists of things that must get done. In the face of pain, and hopelessness, and death what must get done?  In the face of those things, is there ever a thing we can do, that can be scratched off a list?
There comes a time when everything we do feels futile.  There comes a time when I have no wisdom to speak, no sustenance to offer, no work of my hand to save you, or me, or the world around us.  All is lost and we are being swept away.  I sit with paper and pencil in hand, and I write nothing because there is nothing to write, because I am still stubbornly sitting with the "To Do" list.
It does not seem enough to love.  When love is all that we have to offer, why do we feel empty handed?  When all we can do is weep and hope, why do we feel as though we have given up?
Posted by Nobody at Thursday, September 25, 2014 No comments:

Email ThisBlogThis!Share to TwitterShare to FacebookShare to Pinterest
Labels: God Thoughts, Just Me 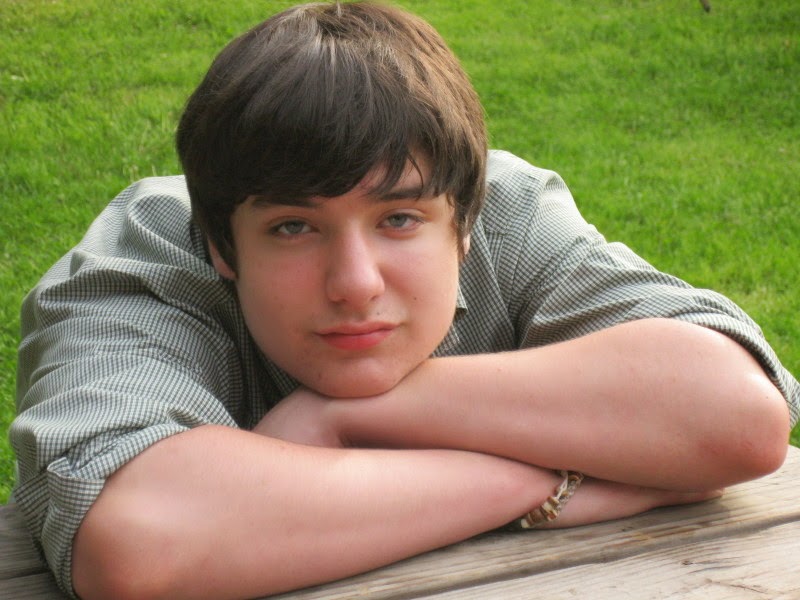 Dearest Justice, today is your graduation day, and honestly, at times, I wondered if we were ever going to get here.  I wondered when you were nearly three years old, and you had not yet said one word.  I wondered when you were nearly eight years old, and you had not yet learned to read.  You came to me one day, and you said, "Mommy, don't worry about this learning to read stuff.  I'm pretty sure I will never use it anyhow."  I asked you what you were good at, and what you planned to do then.  You informed me cheerfully that you were really good at catching frogs and things.  Well, in spite of this solid career plan, eventually you learned, not only to talk and to read, but much more than that, to love the words in stories and songs.
*****

About ten years ago, during our early years at Rock Mountain Bible Camp, Justice could be seen prowling the wet places on camp, in search of all sorts of critters he would then beg to make his pets.  I remember one day, he was wearing his traditional uniform of brightly colored swim trunks, a grimy tee shirt, and oversized rubber boots.  I watched as he perched quietly on the edge of the frog pond, making the occasional lightning quick snatch toward the water.

Eventually I wandered over to see how frog hunting was going that day, and as I approached, I saw that Justice was holding something in both hands.  I asked him, "Whatcha got buddy?" and he answered, "Frogs."

In each hand he was holding several slippery frogs, of varying sizes.  And I realized, that in some mysterious way, Justice was not only catching the elusive little creatures, but that he was also managing to hold onto each one as he then caught another, all without damaging any of them.  To this day, it seems a nearly magical thing to me. 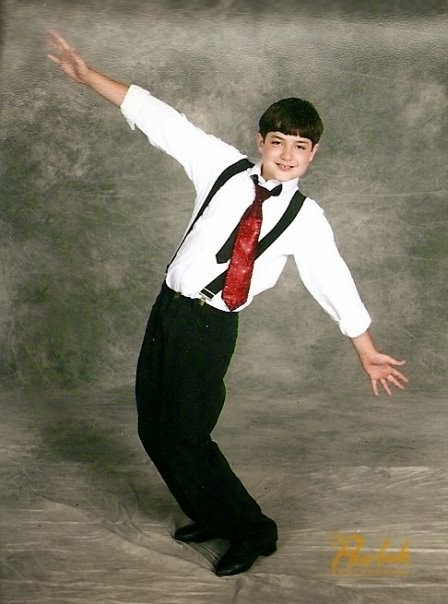 At about that same time, Justice decided he wanted to become a dancer.  Each week he would trade his rubber boots for tap shoes, and head out to the Windwood Hill Dance Studio.  When Justice was ten years old, Miss Bobbie placed him in an intermediate tap class.  Which was fantastic for a boy that had only been dancing for about a year and a half.  Except that his older brother had been placed in an advanced class, and so he was driven to escape that intermediate class, and become an advanced dancer.

That year he worked so very hard, never losing sight of his goal, and the following fall he was promoted to the advanced class.  I will never forget preparing for the recital that year.  How hard he struggled to learn that advanced dance.  I would sit on the floor in the empty dining hall, resetting the music again and again.  He would be lost inside his own head, trying to hear the music, and transmit that message to his body.  But something was wrong, always it was wrong.  At one point I saw it.  His hands.  He was pushing off the air with his hands, and it was wrong.  I remember jumping up to stand next to him, counting out the notes, and pushing off with our arms in the right places.  I returned to the floor, and reset the music, and he danced perfectly.  It was like a door opened, and he stepped through it, and I could never help him again.  Because like the fists full of frogs, it was almost magical.

When Justice was a teen, his older brother Aaron was working through the process of deciding what to pursue after graduation.  He knew he loved comic books and art, and he was researching the possibility of learning the craft of becoming a comic book artist.  He bought books and supplies, and began working at it in earnest.  Alongside of him, Justice would grab a piece of paper and pencil, and sketch, using the suggested guidelines and techniques.  Within a month or two Aaron came to us and told us he had made his choice.  He said, "Mom and Dad, I love comic book art, and I know I am an okay artist.  But I am not good enough.  I want to sell comics, not make them."  We asked him how he had arrived at this conclusion, and he went on to say, "I would sit down to draw, and Justice would sit down too, and in no time at all, I realized he was the artist, not me."  And again, it was the fist full of frogs, an almost magical thing quietly happening while no one was watching.
*****

Most recently, Justice and I have been having a tussle.  We have had many a tussle throughout the years, about schoolwork and chores undone.  About dirty laundry on the floor, and dirty dishes under the bed.  We have tussled about friendships and girls, gently, and usually in the car as we drove back and forth to rehearsals at the dance studio.  As Justice learned to drive, he began driving himself to those rehearsals, and then we tussled about cars, and insurance, and gas.  These are the tussles you remember as one long struggle, but also as the normal blur of teenaged life.  One tussle stands out as different.
Before the boys were born, Joe bought me a beautiful guitar.  It's beautiful to look at, and beautiful to hear, and Justice wants that guitar.  I told him he could play it whenever he wanted to, but that it was still my guitar.  We would talk about music, and what sorts of things I would play on that guitar, back in the years before Justice was born.  One day, shortly after he took out my guitar for the first time, he came into my bedroom and told me he wanted to play something for me.  He began to haltingly strum out the chords and sing "Leavin' On a Jet Plane"...for his momma, because he remembered that was "my" music.  He didn't quite know it though, and he struggled with a few parts that are a little bit irregular.  I stopped him and sang through the sections, and then we started again, together.  We sang together, our music now, and it was a little bit magical.  And it always is, because if Justice ever wants anything at all, he knows that mom can be swayed with a little boy smile and a few bars of "Leavin' On a Jet Plane".
*****
This has been a year of hard things for Justice.  He has been forced into corners he did not much enjoy.  He has drawn up close to adulthood, with all its choices and responsibilities.  He has suffered great loss.  A few days ago, he danced in his final recital at Windwood Hill.  He entered the stage in stark black, and placed a rose in remembrance of a good friend lost.  As the music quietly began, he crossed the stage in a series of spins and leaps.  Although his body was massive in comparison to the little boy who had danced in his first recital ten years before, he propelled himself into the air with grace and landed silently on the ball of one bare foot.  And once again, it was magical.  The kind that was happy and sad, and filled with memories of little boys with frogs and rubber boots, and tap shoes and guitars.
*****
Justice, my dear baby boy, graduation speeches are often about going out and making your way in the world.  About working hard and reaching your full potential.  I could also choose to preach you a sermon on any number of worthy topics.  It is my hope that the other speakers today, have those things covered, because I am choosing to take a different route. All I really want to say to you, is that you are our son and we love you.  You are the brother of many.  The student of few.  A good and true friend.
You may yet do many wonderful things.  You may work hard and achieve success.  You may learn and grow and improve yourself.  You may love someone deeply, and raise up a family of your own.  We will be proud of you for those things, as every parent would be.  But no matter what you do, or what you do not do, we will always love you for being yourself.  You didn't make magic because you were the fastest frog catcher, or the most skilled artist or dancer, or because you make music with your fingers and your voice.  You make life good because of who you are.  A lover of nature and of all creatures, even small slimy ones.  A boy, and now a man, filled with creative energy that is a gift from God to you, and through you, a gift to us all.  A strong man with a tender heart.  Justice, don't worry about impressing us, because we are already impressed. 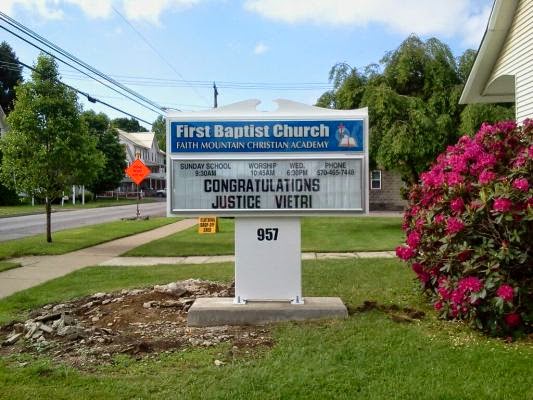 This is the speech I was privileged to deliver at Justice's graduation ceremony today.  I cried a little.
Posted by Nobody at Thursday, June 05, 2014 4 comments:

Nobody
On a dirt road in the sticks

Stuff I Look At Sometimes